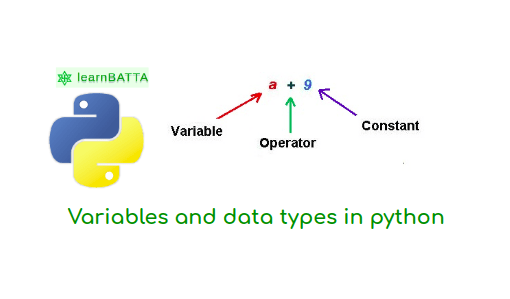 What is a variable ?¶

Variable is a name which is used as a pointer to data that is stored on computer memory. In python we call variables as names.

In above python program we have stored the message "Hello World" in the name/variable message. Actually it is stored in computer memory and variable "message" is a pointer to the data "Hello World". In above program when we print "your_var" we got an error. Because the the variable/name is not defined. Instead of naming the variable as "message" we can use anything like "my_var", "your_var", etc. But, it's not a good practice to give random names. We should follow some rule to name variables in python.

Note: Use variable/names only if you use it more than once

Note: It needs some practice to use good variable names.

What is a datatype in python ?¶

In python, we can classify the data types into two.

In python we can also define our own data types. The above mentioned data types are some of the built-in data types provided by the python. We will learn more about each of them in coming articles.

Boolean data has only two values True and False. It is the most used data type. Lets start working with bool data type in python.

An operator is a symbol in programming which takes two operands to perform an action.In this article we learn how to working with operators in python