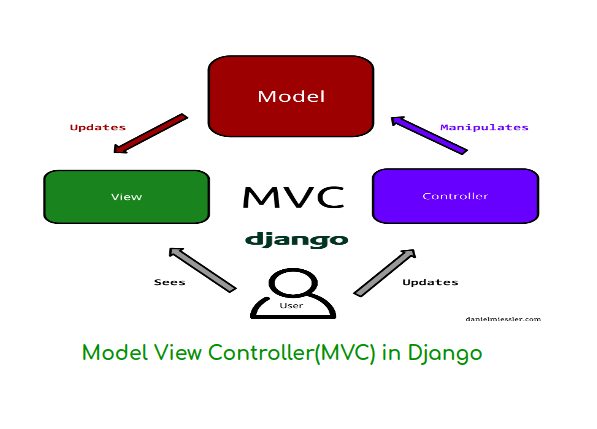 What is Model View Controller? We call it in short MVC. It's a software architecture pattern that is used to divide the complex software into simple parts based on the functionality. When we use Google for web search, we simply open Google and search for "food" let's say. Then google will show us results about food. This what we see. But, actually what happens is when we search google with keyword "food", browser sends request to google server with query parameter as "food". Then, it will query the google search index database and fetches the records from the database. Let's say, these records not in the order as we see it in the google webpage. So, Google has to process queried database records to put them in order to display it. By using the processed data It will generate the html document to present it to the user.

To simplify the software development software architects divided the process into 3 parts.

Let's do CRUD operations on django model. In the previous article we have seen how to create a table or model in the django application. Let's write basic queries like insert, update and delete queries using django ORM.

In this article we will talk about passing dynamic data to templates for rendering it. As we know django is a MVC framework. So, we separate business logic from presentational logic.

Every website needs to serve the extra files such as images, CSS, JavaScript. The name static itself indicates that contents of files do not change.